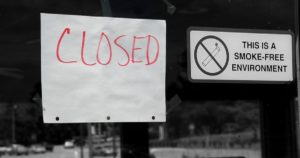 The franchise industry is unique in so many ways, but that is not always good. For most, buying a franchise, next to buying their home, is the biggest investment they will make. Unlike all other investments they make, they risk everything in buying a franchise, every asset they own, and then some. You ask, how can that be possible? Besides the personal guarantees, many contracts contain a clause, or wording, that enables the franchisor to collect liquidated damages, or future unearned royalties. If your franchise business fails, and you lose your investment and more, the franchisor has the right to sue you for royalties that would have been collected if you had managed to stay open. It’s literally salt in the wound.

This clause will hold true, even if there is a brand failure, and a large percentage of outlets fail. The failure may be entirely the fault of the franchisor. It doesn’t matter. The franchisor may still be entitled to collect these liquidated damages. At what point is the franchisor, as the brand steward, held responsible for a franchisee failure? Outsourcing the risk to the already failed franchisee is contrary to good social and business policy. It’s simply unfair for the franchisor to be paid future royalties, and profit, from a failed business and franchisee, when it is the business that the franchisor should have a duty to help succeed.

Let’s look at some examples. First, one of the biggest failures in franchising is Quizno’s. From a peak of around 5000 outlets, Quizno’s today has less than 400. I think most would call this a systemic failure, which is hard to blame on the franchise owner. It’s pretty easy to point to the excessive markups the brand was charging on products. That didn’t stop the franchisor from seeking liquidated damages in some cases.

Cold Stone had a similar story, with increased product markups and weak sales forcing many franchise owners out of business. Yet, at times, they aggressively pursued liquidated damages. Cold Stone would file a claim for $70,000-$80,000 against the franchisee, which often forced that franchisee to file personal bankruptcy, since business Chapter 11 bankruptcy would not halt actions with the personal guarantees in force. If they didn’t, and after multiple legal motions, Cold Stone would often offer a lower settlement amount, under $10,000. The franchisee knew it would cost more to fight at this point and agree. But, why would the franchisor do this? Because, the franchisee would have to agree they owed the original amount and were accepting a collection agreement. This means from the disclosure document point of view; the franchisee was guilty. But, most of all, they just bought the now ex franchisee’s silence. As part of the agreement, the franchisee could not disclose their dealings with the franchisor and could never discuss their experiences with the brand publicly, or the entire claim would become payable. Think about it, clean disclosure, no negative public comments, a perfect solution for the franchisor. For the franchisee, there’s a downward spiral of debt and more debt.

And finally, let’s look at something more current, Dickey’s BBQ. As I have previously reported (Is Dickey’s BBQ Franchising’s Next Quizno’s, Can Dickey’s BBQ Franchise Owners Survive?), Dickey’s failures are rampant. But, how bad would it be if they weren’t actively enforcing their liquidated damages clause? Of the owners I’ve talked to, or who have reached out to me, they would quickly close and walk from their investment, but can’t risk, or afford, the 5-year liquidated damages clause. As bad as the brands closures have been, it would be much worse if, in effect, they weren’t forced to stay open. What’s shocking is that the 5-year clause is actually longer than the average franchisee’s survival in the chain.

So why doesn’t this practice end? Because, most of the leaders in the industry are franchisors, and liquidated damages allows franchisors to both profit and control franchise owners. Quite frankly, many don’t care whether or not this practice is ethical. They don’t care how many lives are financially ruined. If they did, the industry would change. All they care about, and report, is how many units open. You never hear how many close, are unprofitable, and how many jobs are lost. Keeping franchised outlets open make them look successful, even if they’re not. The industry often claims franchised outlets are more successful than non-franchised business based on franchised non-businesses closing more often, when in fact, this statistic is skewed by liquidated damages clauses forcing unsuccessful franchised businesses to stay open, to the detriment of the franchisee. Shame on the industry. It’s time for franchise owners to stand together and stop this unethical practice. Let your legislators know what is happening and encourage them to support laws that protect franchise owners. Don’t sign agreements with such language. Franchisees are the money engine that allows franchisors to flourish. It’s time we take control of the terms and conditions.