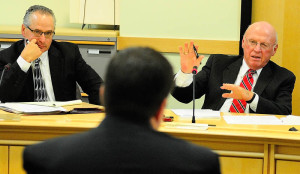 Commission findings are due to be published on December 2nd, 2013

Gov. Paul LePage announced on April 17 that he was forming the blue ribbon commission, a special commission to investigate the state’s entire unemployment compensation system.

According to a news release from Gov. LePage’s office, the Blue Ribbon Commission includes representatives of both employers and employees in order to maintain balance and impartiality.  “The goal of the Commission is to ensure Maine’s Unemployment Insurance system provides benefits for workers who are rightly entitled to them, while ensuring businesses are not charged when they appropriately let employees go.”

Gov. Lepage says he created the commission because he wants to make sure the system is “fair and consistent for all Mainers.”

On April 23, Gov. LePage announced the Hon. George M. Jabar, Commissioner for Kennebec County and practicing attorney in Waterville, and the Hon. Daniel Wathen, who served for 20 years on the Maine Supreme Judicial Court, ten of which as the Chief Justice, as co-chairs of the Commission.

The Blue Ribbon Commission held a public hearing from 1:00 to 7:00 on September 12 at the State House in Augusta.

According to the Kennebec Journal, employee rights advocates, business owners and state employees outlined on Thursday an unemployment compensation system that is complex and difficult to navigate for both employers and the unemployed.

Another problem identified by those who testified is a lack of knowledge about the process among both employers and former employees trying to file unemployment claims.

According to Business Week, at the hearing, several employers said the unemployment system unfairly favors the employee.  Colleen Bailey, who owns multiple Dunkin’ Donuts locations in Maine said the system is so complicated and time consuming for employers that she often would rather skip the hearings and just pay the employee.

“It is complicated. It is hard to work with. I’m ready to give up and let everyone collect, but I don’t want to do that,” she said. “I want to be fair to everybody,” Bailey said.

The commission met with representatives at the Maine Department of Labor and the Bureau of Unemployment Compensation for two months leading up to the public hearing.  They also reviewed hundreds of unemployment claims in order to examine the consistency and objectivity of the unemployment adjudication process.

The commission is still weighing the input from all who testified at the hearing in September and will file its report with Gov. LePage on December 1.