In 2009, when FairPoint Communications wanted to entice the Maine Public Utilities Commission to approve its acquisition of Verizon’s landline business in Maine, it sweetened the deal with a promise to invest in Maine’s economic development.

The telecommunications company won its approval and invested in excess of $500,000 over several years to commission ViTAL Economy, a Maryland-based consulting firm, to assist one Maine region to develop a new kind of economic development strategy — one based on leveraging a region’s 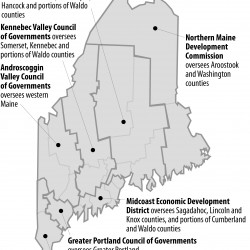 The nascent effort was dubbed Mobilize Maine, and northern Maine was chosen as the guinea pig.

More than four years later that initiative has blossomed into a statewide effort to develop an economic development strategy for all of Maine.

Last week, Mobilize Maine received official word that it will be awarded $575,000 from the U.S. Economic Development Administration to bring that goal to reality, according to Mark Ouellette, Mobilize Maine’s statewide executive director. It is the second such grant the group has received, bringing its total amount of federal EDA funding to $1.15 million.