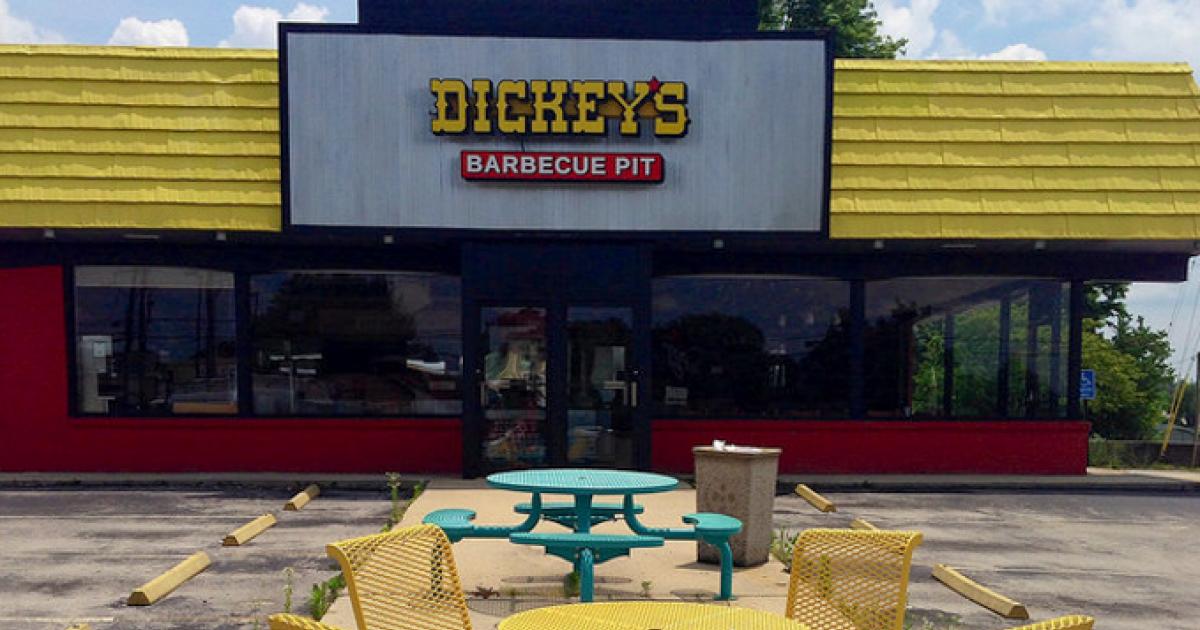 It’s not easy to forget the Quizno’s saga.  Once one of the darlings of the franchise industry, growing through franchising to nearly 5,000 locations, but today, just under 400 in the United States.  Many franchisees lost everything (investments, savings, their home), and as stores closed, eventually the franchisor filed for bankruptcy protection.  Yet, has the industry learned any lessons?  Quizno’s did not fail because of consumer issues, but internal issues that made the business model unprofitable for franchisees.

Another brand may be following in the footsteps of Quiznos’s.  Dickey’s BBQ, although smaller, has some scary similarities to Quizno’s, especially from the franchisee perspective.

I have reviewed the Franchise Disclosure Documents (FDD) dated September 1, 2017 and September 4, 2018 and have been in contact on this matter with 26 current or former Dickey’s franchisees, representing 50 units.  What I have read and been told leads me to the conclusion that the Dickey’s system has some serious issues, much like the Quizno’s system had before its implosion.

In fiscal year 2017, they opened 88 Dickey’s franchised outlets, but some 70 (the 2017 FDD actually reported 73) ceased operations, according to its FDD.  For almost every location added, one closed.  The brand ended up with 562 units.  To put it mildly, it’s not healthy to see over 10% of your stores cease operations.  But 2018 made 2017 look good.  In the latest year, the brand opened 72 new franchised units, but had 89 terminations and 24 ceased operations, for a net store loss of 41 units.  I suspect most of the terminations were likely an abandonment by franchisees, essentially a ceased operation.  If you add in the transfers of 44 locations, that’s a total churn*, also referred to disorderly attrition, rate of 28 percent of the brand – in just one year.

Bluntly put, that is alarming. 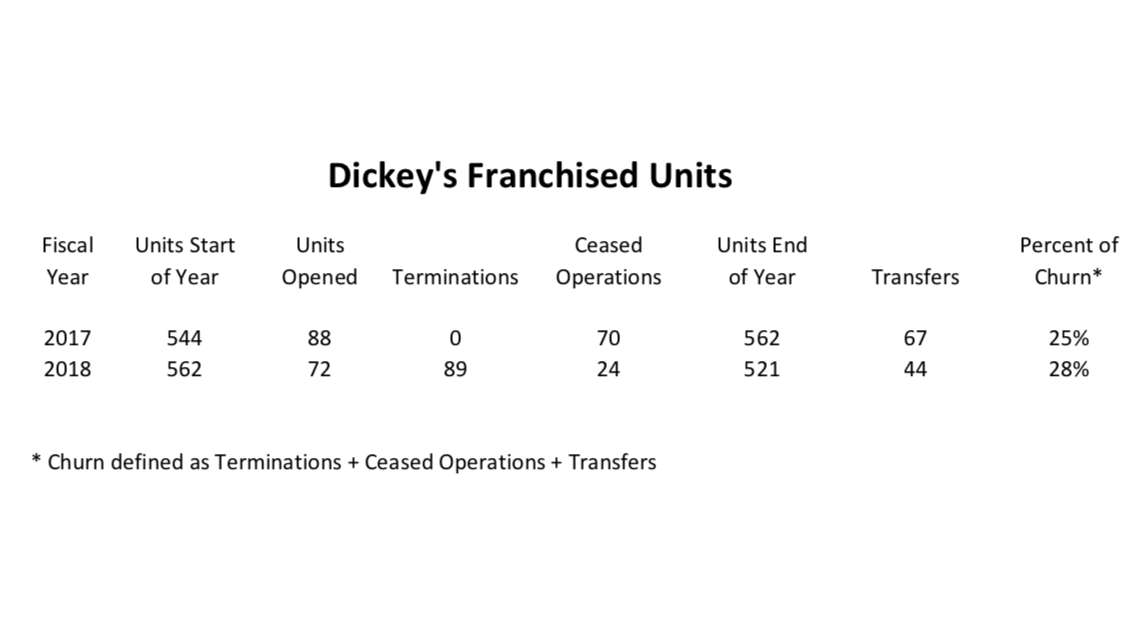 Many franchisees felt that the financials on revenue and costs given, formally and informally, were less than truthful, and these were often used on applications for loans (including SBA 7(a) loans) that later defaulted. They also felt many of the system changes implemented made the presale disclosures no longer representative of the business. What makes failure worse for Dickey’s franchisees is the fact that their franchisor is often enforcing a liquidated damages clause in which the closed franchisee must pay projected future royalties to the franchisor for up to 60 months, despite having left the failed business.  Many said they were unprofitable, and should close, but had to weigh the decision of whether they would lose more money staying open or being sued for 5 years of royalties. It needs to be argued that the liquidated damages provision is unconscionable when such a high percentage of the brand is failing.  Think about it, at a 28 percent churn, you turn over the entire chain in less than 4 years yet require 5 years liquidated damages.  If the outlet was only doing $500,000 in sales, the 5 year liquidated damages clause would cost $125,000.

So why are so many outlets unprofitable, and forced to close, or operate at a loss.  Franchised restaurants have an estimated average unit volume (AUV) in the mid $500,000’s per year (since Dickey’s dares not supply franchise-level earnings in Item 19 of the FDD, it has been extrapolated from FDD financials using advertising revenues and from the input of the franchisee contacts).  With the pressures from today’s increased labor and rent costs, that level of AUVs makes for extremely narrow margins.

The added common thread seems to be the continued escalation of product costs, that appear to be far and above normal market prices.  In this case, the franchisor fully controls the distribution channels.  Like Quizno’s, continued markups seem to contribute to increased revenues into an “affiliated” company.  For example, the FDD states that in fiscal 2017, their “affiliate, Wycliff, received a total of $22,119,583 from indirect purchases by franchisees of certain paper and food products.”  This was up from $15,407,160 in 2016. Why the 43 percent increase when the number of units barely rose and AUVs remained relatively flat?  If purchases by franchisees were flat year to year, this could represent an increase of approximately $12,000 per store.  That alone is a 2.4 percent increase in costs against revenues, going to an “affiliated” company of the franchisor.  Can someone tell me how that is any different than increasing royalties by 2.4 percent?  I’m not saying what they are doing is illegal, however being legal doesn’t always make a franchisor’s decisions ethical.

Franchisees have expressed concern over is the lack of transparency of marketing funds that have been paid by franchisees.  These franchisees are not happy about continued rising product costs, and new fees for “services” by the franchisor or one of its affiliates. Plus, constant changing of menu formats, logo and branding designs, and new menu recipes have cost franchisees customer loyalty.

Most of all, franchisees have expressed concerns in speaking out against bad moves by the franchisor, for fear of falling victim of Dickey’s retaliation.

What disappoints me most as I watch the problems with Dickey’s unfold, is how the industry leaders put their heads in the sand and ignore the problems.  Unfortunately, franchising focuses only on the sale of franchises, and so many in the industry are only rewarded when a franchise agreement is signed.  It creates a moral hazard that often forgets about the individuals put at risk when signing the agreement.  Of course, we saw the same reactions with Quizno’s.  And while most of the press will concentrate on franchisor issues, and the loss of company equity to shareholders, it will ignore the losses to the biggest, and most vulnerable, stakeholders of the brand, its franchisees.

Why is all this important?  In addition to the number of closures reported in the FDD Item 20, Dickey’s also shows 78 additional franchise agreements signed, and that they plan on opening a total of 139 units in the next fiscal year.  So, while the franchisor continues to collect franchise fees and have a strong balance sheet, franchise owners lose their investments at a record pace.  Prospective franchisees need to have the knowledge to make informed decisions and need to know the performance of brands with a higher likelihood of failure.  If you are considering purchasing a Dickey’s BBQ franchise, please refer to the Resources listed at the bottom of the article.

This article is my opinion based on contacts with current and former franchisees, and after reviewing the last two years of disclosure documents.  I welcome the franchisor of Dickey’s BBQ correcting any errors in my statements.  Interested current or former Dickey’s franchisees can confidentially reach me at kmiller@franchiseeadvocacy.com.