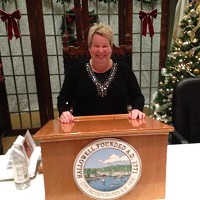 Hallowell Mayor Warren, at the Podium in City Hall

Despite a small population of a little more than 2,300 people, Mayor Charlotte Warren says Hallowell, Maine has an “absolutely booming downtown.”  According to Warren, “There are no empty store fronts, and full streets. That is the result of a vibrant community who is working together for the same purpose: a thriving city.”

After becoming Mayor in a hard won race four years ago, Warren set forth a big goal: to get new people, young people, and even people who have never been involved before, involved in politics.  Warren said the idea came about in her days of working as part of the City Council.  She realized she was the only woman, and easily the youngest.  “What I saw was that there wasn’t a lot of diversity,” Warren said.  “Diversity brings about fresh ideas.”

Warren also made sure that the voices of business owners are brought to the table when the municipal government is meeting and making decisions about downtown. 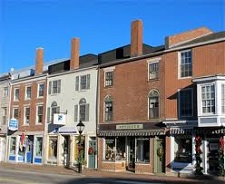 “We work alongside business owners,” Warren states.  When she first became Mayor, snow removal was left up to each individual store owner.  “It just wasn’t working,” she said, making the point that some business owners aren’t around all the time, or they aren’t open every day, and it can also be dangerous walking on the sidewalk, then having to walk through the snow or on ice.  “We decided together that it is the responsibility of the Public Works Department to deal with snow removal,” Warren went on to say.  “It’s all part of our cooperation together.”

Grassroots lobbying is something Warren is a big advocate of.  “Sometimes we forget, not just as businesses, but everyone, how important our voices are,” she said.  In an article Warren recently wrote on grassroots lobbying, she explained it as “when everyday citizens contact their own legislators to try to influence legislation and policy.”

“Grassroots is a great way to get more voices to the table,” Warren said.  “I just love it.  It’s bringing power to the people.”

Lastly, Hallowell offers so many events and festivals spread out over all seasons.  According to Warren, this is proof that everyone is working together “to make Hallowell a destination.” “If we can bring people from surrounding cities to our festivals and events, they’re going to check out our shops, and they’re going to come back,” Warren states.  “We just keep an eye on what’s best for everyone.  It really is a partnership.”

“I asked them questions such as where they live, where their stores are located, would they be willing to testify at public hearings, or even have coffee with legislators.  This is all important to know in order to get a better understanding about who I should set them up to talk to.”

We hope to see you there.