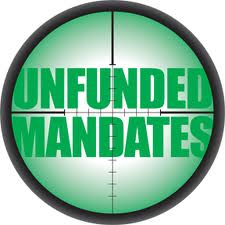 An unfunded mandate is a statute that requires for example, business owners to perform certain actions, with no money provided for fulfilling the requirements.

Connecticut is the only state that has passed a paid sick leave law. Connecticut’s law went into effect on January 1, 2012. The law applies to “service workers,” who are paid by the hour and work for an employer with 50 or more employees. Temporary workers and non-hourly employees are excluded from the law’s coverage. Eligible employees begin accruing leave when they begin employment, but they must work for an employer for at least 680 hours and average at least 10 hours per week of work for the employer in the most recent quarter before they may begin using any paid sick leave. Employees earn one hour of sick leave for every 40 hours they work, up to a maximum of 40 hours of sick leave per calendar year. Paid sick leave may be used for the health condition or medical care and treatment of the employee (or of the employee’s spouse or child) or for reasons related to family violence or sexual assault.

The Philadelphia City Council passed a paid sick leave bill on March 14, 2013, that would require private employers to provide one hour of sick leave for every 40 hours worked by employees in Philadelphia. Philadelphia Mayor Nutter vetoed the bill, as he did with a similar bill in 2011.

Mayor Nutter, in his veto message, said mandatory paid sick leave would result in job cuts that would hurt “the very workers this bill is intended to help.”  And he said it would hurt the city’s ability to attract new businesses.

The title includes “Unfunded Mandate” the real story is that it will be funded by you and other small business owners.

Mandated Paid Sick Leave is extremely problematic for businesses that rely on near minimum wage employees.

Connecticut is the first state that passed mandatory paid sick leave and some say there are bills that will be submitted in the capitals of over a dozen states come January. A broad coalition of business owners will be needed to prevent or circumvent the law in the State of Maine. That’s one reason the franchise owners in the State of Maine are organizing, to make sure the 3,500 franchised units in the State have a strong and effective voice in Augusta.