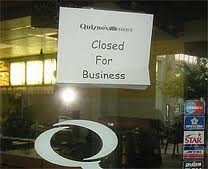 Portland – As Maine Quiznos franchisees fail miserably under a broken business model, some are questioning what detriment there will be to their state’s economy. Analyzing the sub sandwich chain’s past franchise disclosure documents shows there was approximately $5.4 million in citizen economic loss.

The human toll is even larger. Quiznos franchisees and their families have been and will be devastated financially and personally for the remainder of their lives.

While the total number of Quiznos franchisees in Maine is small compared to most states, the Denver-based sandwich chain’s path of destruction across the country can easily be recognized. With more than 5,000 U.S. restaurants during its peak operation in 2006, there are now only 1,400 franchised locations. Of those remaining, approximately 600 are Hess gasoline stations, mostly in Florida, where clerks take money for cigarettes and gas, then turn around to make Quiznos sandwiches for station customers.

In addition to the loss of time and effort, each Quiznos franchisee failure represents the loss of business investment and years of operating losses that the franchisee covered before the bank account was drained too many times.

Few franchisees were able to make money in their Quiznos restaurant businesses. The evidence points to the sandwich chain falling from 5,000 units at its peak to 1,400 today, a loss of 3,600 restaurants in a seven-year period.

Franchisee attests to financial and personal devastation in system

Ken Madore, former owner of two Quiznos locations in southern Maine attested to the financial ruin in being a franchisee. “We were all doomed from the start and we had little to no recourse. While we tried everything in our power, we soon learned the deck was stacked against any Quiznos franchise owner. We could not reach breakeven.”

Madore said at one time there were 26 Quiznos stores in the state. “That was in the peak time in 2006. It’s hard to believe there are only two left today.” The former franchisee had to work a full time job while running his franchises, just to have some money coming in. “My wife was acting as the onsite operator of the stores. That’s how we were able to keep our heads above water. We had to have income coming in to survive. Other franchisees didn’t do that, and many had to close their shops and file for bankruptcy.

Madore said Maine has had Quiznos investors who have lost hundreds of thousands of dollars. “We’ve also had young couples who lost everything and just walked away from their stores. There have also been situations where franchise owners have created turmoil within their families. He said the stress of dealing with the business affected the relationships between husbands and wives, parents and children. “The kids no longer will even talk to the parents. It affects the entire family,” Madore explained.

Analyzing the cost of failure of franchisees

Analyzing Quiznos’ FDDs and legal documents shows franchisees had an initial build out/investment expense, then typically an additional expense to fund the operating expense, to keep the store open.  Few franchisees made money, according to insiders. They say the Quiznos business model was stacked against them, with high food and paper cost supply markups and fees on practically every other service that the store paid, with a kickback going to Quiznos.

Some franchisees opened the store, paid for the build out and then remained in operation for about three years, hoping the business would eventually work. It didn’t, and then either sold the store to a second stage franchisee, or closed it up. That was the first wave of franchisees.

That typical franchisee paid Quiznos its initial fees, inserted cash to begin the business and took out a loan to cover the initial costs and store build out expense. Building, equipment, and other startup costs were about $300,000. Operating losses incurred were about $150,000. When the store finally failed, the franchisee incurred economic losses in the range of $450,000 total per store failure.

Debt service on the bank debt was incurred and then was expensed to the store profit/loss statement, via typically a six to twelve percent loan, usually amortized over a five-year period. Store operations loss including this debt service was about $50,000 per year. The typical franchise business life span was about three years after build out. Franchisees had to make principal repayments of their debt, typically $200,000, spread over a five-year term. Operating losses, including interest expense would have been about $150,000 in total over a three year business life. Some franchisees were able to sell their leasehold and equipment for $40,000, but some zero, some as low as $5000.

There was a second wave of Quiznos franchisees who bought out the first franchisee or was granted the franchise. Paying Quiznos its initial fee of $25,000 along with other startup expenses, this franchisee initial investment was approximately $50,000. While much less expensive to get in, the second stage franchisee still had to make a go of the operations. These franchisees did not fare better than the first stage, often worse, since Quiznos sales began to collapse in 2008, when they logically would have entered the system. With less debt, the franchisee operating loss was estimated at about $35,000 per year. Assuming no debt service and the same three year business cycle, the franchisee out-of-pocket cash loss was about $155,000.

As a result, the first wave Quiznos franchisees had a total economic loss of about $450,000, and the second group had losses of about $155,000, each over an estimated three-year business cycle.

The mix of Quiznos losses nationally included both sets of franchisees. The Quiznos Franchise Disclosure Document does not lend itself to determining with precision that entered or left the system individually. But we can see that the peak Quiznos units in operations in Maine was fifteen in 2005, and three as of yearend 2012. By the reports analyzed, it appears all of Maine’s first wave franchisee losses were more costly.

These twelve Maine franchisee failures accounts for an approximate loss of $5.4 million in citizen economic loss in Maine. Every small business knows there is always the possibility of failure, but not that the business deck was stacked against them from the beginning, as was the Quiznos situation.

Indirect losses to society were also incurred, but more difficult to quantify. For example, these franchisees often represented families that were hobbled by the business loss. Some had lenders, landlords and Quiznos itself that pursued liquidated damages against them after the business failed. Such large cash losses were not easily offset after the Great Recession. Store employees were affected by business closure, as were other tenants in the trade area where they were in operation, due to a loss in foot traffic and business activity in the associated market areas upon the eventual Quiznos store closure.

Bob Bhupinder Baber, who was rejected by Quiznos and the franchise community, became the symbol for thousands of Quiznos franchisees, after he took his life in a nearby California Quiznos restaurant. The franchise owner cried out for help in his desperate situation of losing what he considered to be the American dream he worked so hard for.

Mr. Baber tried to do everything right as his franchise agreement dictated. Documents show he had invested approximately $500,000 in his two Quiznos restaurants. When he realized the franchisor had misrepresented many of the material facts of the franchise to induce him into buying the sandwich stores, he formed a franchisee association to gain strength in numbers. But Quiznos then began targeting him for using its trademark name in labeling the organization, and soon terminated his franchise agreement.

Baber was then thrown into a quagmire of litigation with the company, resulting in legal bills of $100,000. Eventually, the court system came down on Quiznos’ side. The franchisee felt that decision was “the practical death knell to any chance he and his wife had of receiving the huge losses he had suffered as a result of Quiznos’ improper actions against him.

On November 27, 2006 Bob Baber walked into the restroom of a fellow-franchisee’s restaurant and shot himself three times in the chest with a .380 caliber handgun. Police found a suicide note on his person, attributing his death to his insurmountable problems with Quiznos. The note pleaded for the media to investigate the business practices of the franchisor, and tell his story of despair.

In his suicide note the franchise owner exclaimed, “Someone must do something about what Quiznos is doing to the trapped franchisees,” he wrote. “I deeply regret getting into Quiznos. I wish I had never heard of them.”

He continued stating, “I have struggled hard and did the best I could to create a voice for the franchisees . . .  and to fight the injustices of this franchise system (Quiznos). Not to bring the system down, but only to make it fair.”

Baber left a wife and children.