To Begin at the Beginning…

Many believe that Albert Singer, founder of the Singer sewing machine, was the initiator of franchising. He was actually the earliest person recognized by most in the United States as being associated with franchising. However, the concept of franchising really began long before.

The term ‘franchising’ derived from ancient French, is defined as holding a particular privilege or right.

Back in the middles ages, local leaders would designate privileges to citizens. Some of these rights included conducting fairs, running markets, and operating ferries. The franchising idea then carried forward to the practice of Kings yielding rights to conduct activities such as beer brewing and road building. In addition, the expansion of the church is known as a form of franchising.

The Evolution of Franchising

Spaten Beer was one of the first breweries in Germany to franchise it’s brand of Beer in the 19th century.

During the 1840’s, several German ale brewers granted rights to particular taverns to market their ale. This was the beginning of the type of franchising that became familiar to most of us in the twentieth century.

Franchising then traveled from European brewers into the United States. Before franchising there was not much in the way of chain operations, which would eventually form the basis of franchising in the U.S.

Peddlers in early American history, selling items from town to town, were also considered a form of franchising. Licenses were provided to general stores at military outposts as well. These exclusive territorial rights are described in written literature, however specific names are not. 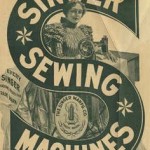 Singer Sewing used franchising as a method to expand the use of Singer Sewing machines.
The franchise owner sold, trained users and repaired machines.

Albert Singer came on the scene in 1851 with the Singer Sewing Machine Company. Singer made use of franchising to distribute his machines over a widespread geographic area. He is the first actual name recognized as an early franchisor. Additionally, Singer was the first to prepare franchise contracts. These documents then became the basis for the modern version of franchise agreements.

In the late 1800’s and early 1900’s many other forms of franchising took place. Some examples included monopolized franchises for several utilities as well as street car companies. Then as oil refineries and auto manufacturers found that they could sell their products over a larger geographical area, they began to franchise.

After the Second World War franchising grew rapidly, propelled by companies looking to expand quickly. Soft drinks giants like Coca-Cola and Pepsi couldn’t economically operate US-wide with such high water content in their products and expensive transportation relative to its cost, so they developed a franchise system whereby franchisees would carbonate and add water to the companies’ centrally-manufactured and distributed highly-secretive syrup recipes, bottling and selling it locally. 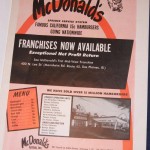 One of the first ads to own a McDonalds Franchise.

Transportation and increasingly mobile Americans were the basis for the establishment of retail and restaurant chains/franchises. As time went on a large number of establishments began to franchise. Some of the well-known franchises include Kentucky Fried Chicken in 1930, Dunkin Donuts in 1950, Burger King in 1954, and McDonald’s in 1955.

The huge growth in this modern system of franchising is attributed to milkshake machine salesman Ray Kroc, who, when visiting San Bernardino in California, visited a popular and busy drive-thru restaurant – which was owned and run by the McDonald brothers.

As franchising expanded rapidly in the 1960’s and 1970’s, also came a large amount of oppressive activity to contend with. There were several companies that were under-funded and poorly managed, therefore going bankrupt leaving many franchisees in a lurch. More upsetting were the fraudulent companies who literally took peoples’ money for nothing.

These unfortunate events led to the formation of the Franchise Rule. In 1978, the FTC created the Uniform Offering Circular (UFOC) requiring franchise companies to provide detailed information to potential franchisees. This document was updated in 2007 and renamed the Franchise Disclosure Document (FDD). 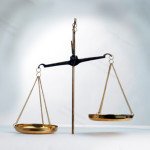 Unbalanced Scale of Justice for franchisees

Over the past 2 decades franchise agreements have become increasingly one sided.  In order for franchisees to perpetuate their income and protect their investment they have had to sign renewal franchise agreements that eroded much of their rights they had when they started and with which most business owners enjoy in every state of the union. 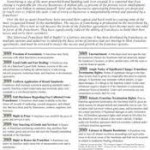 This Universal Franchisee Bill of Rights is a fairness doctrine. You can click on the image for more information or to endorse it.

In 2010 the Coalition of Franchisee Associations (CFA) created and drafted the Universal Franchisee Bill of Rights (UFBOR). The intent of the UFBOR is to identify a fairness doctrine to evaluate whether that particular franchise agreement and/or franchise system provides adequate protection for franchisees to build, harvest and perpetuate their equity in the franchise system. Over the past 2 decades franchise agreements have become increasingly one sided, in order for franchisees to perpetuate their income and protect their investment they have had to sign agreements that eroded much of their rights as independent business owners.

The success of franchising is often built on a foundation of a mutually advantageous business relationship, where franchisees provided the capital, and sweat equity to build brands into brand names. Since the emergence of the terribly one sided franchise agreement, many franchise relationships has become unbalanced; that imbalance threatens the future of franchising.